Marathon is a word full of history. The origin of the word comes from the region of Marathonas and the battle conducted there between Greeks and Persians in 490BC. The word “Marathon” derives from the outstanding effort of the Athenian runner Pheidippides who ran the distance of 42km to announce the Athenians the victory of Greeks and falling dead immediately after from overexertion. Nowadays in every corner of the world thousands Marathons take place, making Marathon the event with the most participants in the world, while the word ¨marathon¨ is the only common to all dialects spoken worldwide.
The International Marathon ¨Alexander the Great¨ is one of the biggest events that takes place in Greece.The 10th International Marathon ¨Alexander the Great¨ was held on April 5th 2015 and covered the route from Pella, the ancient capital of Macedonia and birthplace of the Great Commander, to the city of Thessaloniki, the modern Greek metropolis.The Marathon, bearing as a symbol one of the most recognizable personalities of mankind, Alexander the Great, is not just a large international sports event, but a journey in history, a path full of Greece, from the ancient Greek civilization to today.

At this great event of our city event and as part of CSR activities, our company was present with 28 participants, who met a unique experience. Marathon “Alexander the Great” is held since April 2006 and has social, cultural, environmental and historical character, highlighting internationally not only history, but also the importance of Thessaloniki and Macedonia as the center of history, culture and sports. Participants of our company, known for their dynamism, willpower and fair play, participated in the Marathon, the 10km road race and the 5km race. The great reward was the recognition and the message sent for sports and healthy living.

We would like to congratulate all participants for their significant effort, their excellent spirit and culture, highlighting with their participation our company’s culture and love for our city. 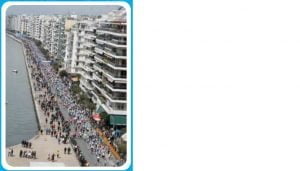